At The Heart of the Major 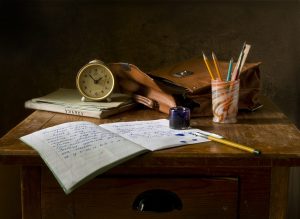 At the heart of the major lies the idea that things in the world do not dictate their own descriptions or the stories we tell about them. Any object, person, or event we describe one way we could just as easily have described another. English majors want to know what goes into these competing descriptions and to weigh the consequences of choosing one type of language—or one form of storytelling—over its rivals.

Within this shared project, different emphases are possible:

1) Some English majors are interested in the literary (or rhetorical) aspects of all language and storytelling, and not just the conventionally literary kind. Do historians write differently than novelists, even though both tell long stories? What are the conventions of science writing as writing? How do climate scientists make their insight persuasive to people who aren’t scientists? English majors working in this vein study language and storytelling across all media: film, TV, ads, comic books, news-reporting, digital media, non-fiction and scholarly writing, as well as novels, poems, and plays.

2) Some English majors are especially interested in questions of power and politics. How does power crisscross the language that we use? Do literary forms contribute to the unequal distribution of power in the US and other societies? Can the stories we tell about people and things contribute to their subjugation? Could a changed language throw that subjugation into reverse? English majors working in this mode draw extensively on critical theory of various kinds: feminism, queer theory, anti-imperial and postcolonial studies, and critical race theory, among others.

3) Some English majors are especially interested in that unusual subset of descriptions and stories that get called literature. What sets literary language apart from ordinary speech or utilitarian writing? What can literary language do that these others can’t? Is there some deficiency in ordinary language that literature means to correct? English majors working in this mode read widely across multiple national, racial, and ethnic traditions, as well as across literary genres and periods of literary history.

Please visit the Covid-19 website for the latest information, including details about vaccination, testing and mask requirements, and travel.